San Andrés is a population entity in the municipality of Santa Cruz de Tenerife, on the island of Tenerife.

It is administratively included in the Anaga district and is considered a town.

How beautiful is San Andrés, a town with a fishing tradition. Here you can taste good seafood in its restaurants and bars.

San Andrés is a fishing village that belongs to the municipality of Santa Cruz de Tenerife. The streets are very clean, the houses well-kept and the flowers in the gardens are a riot of colour.

The people here are very friendly and helpful. You can sit in the square and watch the world go by, or have a drink or eat in one of the many bars and restaurants. The food is fresh and tasty, and the prices are very reasonable.

The sea is very clean and clear, and Teresitas beach is beautiful and the most popular for chicharreros. There are many places to walk and explore, and the scenery is stunning.

If you are looking for a place to relax and enjoy the company of good friends, then San Andrés is the place for you. We hope you have a great time and that you can visit it soon.

It has monuments such as the Torre de San Andrés, the parish church or the old Estévez school, although the city is best known for hosting some of the most popular beaches in the city: Las Teresitas and Las Gaviotas.

Before the conquest of Tenerife by the Castilians, the Guanches, the first settlers of the island, knew the place as “Abicore” and “Ibaute”.

After the colonization, the names of ‘Valle de las Higueras’ were alternated, due to its abundance in the area; “Valle de Salazar”, from its new owners; and “Valle de San Andrés”, for being the patron saint of the hermitage erected in the place. After the founding of the parish, its modern name was consolidated.

San Andrés – Tenerife – How to get there:

If you visit San Andrés, remember to comply with the rules established by the authorities. Respect the surroundings that surround you and don’t leave trash behind. 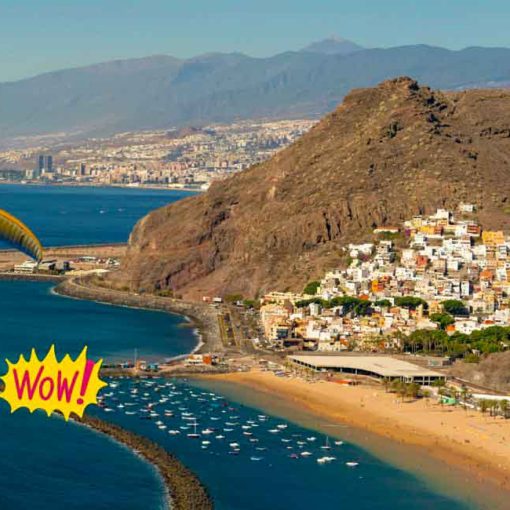